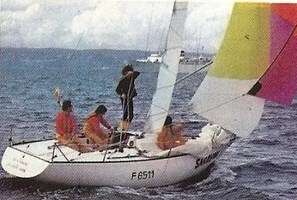 Quarter Tonner is a race sailboat range that enables all boats of its type to compete each other in real time. Inspired by One Tonner and Half Tonner, Quarter Tonner type evolved gradually from a common sailboat rating called RORC. This rating was originally for 15ft, from 1967. Later it was fixed at 18ft within the International Offshore Rule (IOR), and changed again, in 1978, to 18,55ft. This rating stayed unchanged until the last IOR based Quarter Ton Cup in 1996.

There are 2 "Quarter Tonner" sailboats on Sailboat-Data.